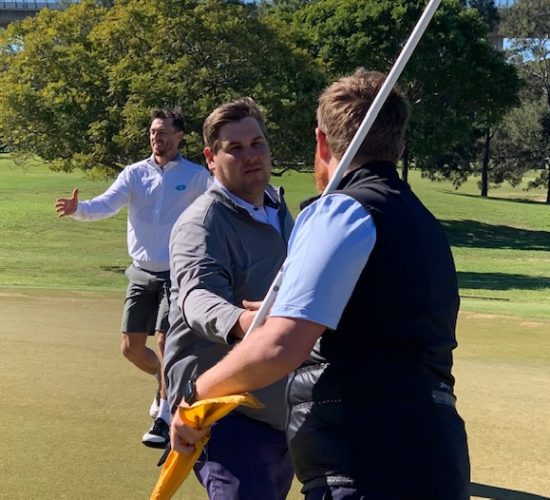 Only half a match separated the two teams over the home and away matches in 2018 and another tough battle was expected.

Wins away from home are always a difficult task and this proved to be the case with RQ defeating BGC 16-5.

Our Juniors fought hard but were unable to secure a point. With both Sam Slater and Conor Whitelock, who are eligible to play Juniors, playing in the Opens our depth was certainly tested. This, however, provided a wonderful opportunity for the Juniors who played to gain some valuable experience.

Our Opens performed well away from home. Six of the matches went down to the last hole which showed the competitiveness of each match. Unfortunately, BGC were only able to secure two points from those matches which proved the difference. Winners in the Opens were Kurt Carlson (1up), Wade Edwards (6/5) and Tom Deane (2up). Both Sam Slater and Ilija Soldan finished their matches all square.

In the Masters, Craig James won 2/1. The experience of RQ on their home course saw them finish strongly in a number of their matches.

Special congratulations to Praty Bharadwaj in the Juniors, Conor Whitelock in the Opens and Craig James in the Masters who represented BGC for the first time against RQ at this level.

RQ have played twice at home this season and are undefeated after beating Redcliffe Golf Club 14.5 to 6.5 last Sunday.

In the other match played this week Keperra Golf Club were defeated 13-8 by Redcliffe Golf Club at home.

Next week BGC will play Keperra Golf Club at home from 7am. Once again we encourage as many Members as possible to come out and provide their support.

We look forward to welcoming back Lawry Flynn who played in the Japan Amateur Championship last week. Also Eugene Estella and Sam Howse who were also both unavailable for selection.

Thank you to our caddies and supporters who braved the cold start of the day to provide their valuable assistance to the team. Special mention to BGC Member and the world’s 64th ranked tennis player, John Millman who caddied for Tom Deane.

The conditions were perfect in terms of course presentation and the weather and our thanks go to RQ for their exceptional hospitality.

Team selections will be finalised early this week and announced on Wednesday.