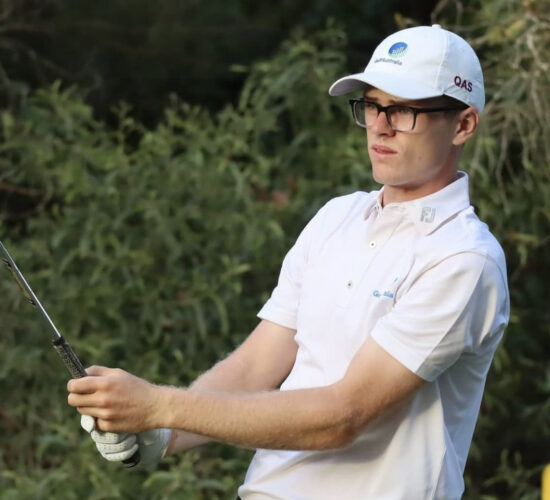 Despite the loss of talented duo Lawry Flynn and Louis Dobbelaar for the upcoming Brisbane District Golf Association Division One Men’s Pennant competition, Brisbane Golf Club Captain, Alan Grieve, is confident of yet another strong showing.

BGC won back-to-back Division One Men’s Pennants in 2017 and 2018, and finished third in 2019 behind Redcliffe Golf Club which, by virtue of last year’s Pennant season being cancelled because of Covid-19, will be the defending champion in 2021.

The 2017 victory was especially meritorious because it was the first Division One Men’s Pennant for the club in almost eight decades. But it was also significant for the fact the club had been promoted to the elite division for the first time since 2000. Previous to that BGC was in Division One just once – in 1980.

And Mr Grieve said that without the talents of Lawry and Louis, two vital members of past winning teams, some ‘old heads’ would need to step up to the plate.

“We will have some new faces joining the regular members of the various squads, and it will be fascinating to see how BGC competes against the other clubs in Division One this year,” he said on the eve of the competition, which starts against Keperra on Sunday, July 18.

“Lawry, who recently turned professional, has played Pennant for BGC since starting in the junior side back in 2013, and has been a member of our Open team since 2015 winning 28 matches for the club in those seven years.

“Obviously, his experience, enthusiasm and talent will be missed at the top of the order.”

Also missing will be 2020 BGC Club Champion and 2021 Australian Amateur champion Louis, who is currently playing in the USA and recently won the Dogwood Invitational in Atlanta and the 121st North & South Amateur at Pinehurst.

“But we expect a couple of ‘older heads’ will bolster our Open side this year,” said Mr Grieve.

“John Smoljko, who qualified No.1 in the Club Championship qualifying rounds, is a tried and tested competitor at this level. And Justin Wells, who recently relocated from Newcastle, has also started working out how good home-course advantage will be during the season.

“As well, not-so-old but long-term Pennant squad members Tom Deane and Lewis Clelland know the BGC layout like the back of their hand and are rarely beaten around their home course.”

And Sam Slater, recently-crowned 2021 Club Champion and the 2020 South Australian Amateur champion, as well as 2019 club champion Conor Whitelock and Club Championship semi-finalists Sam Howse and Ilija Soldan, are also predicted to play vital roles in the race for the 2021 BDGA Pennant.

Mr Grieve said the Open BGC side will have some new faces since the 2019 season, with talented past junior team members graduating to the squad.

“James Sammut, who started with the junior squad in 2017, made the quarter finals of this year’s club Championships and is now pressing for a berth in the Open team,” he predicted.

But the 2021 Junior squad, according to the Club Captain, will be the strongest BGC has fielded ‘in a very long time’.

“Heading the juniors will be either Chris Somerfield who qualified for the Queensland Open earlier this year, or Campbell Kerr, the 2021 BGC Junior Champion, who keeps hitting it further and growing by the month,” Mr Grieve predicted.

“Praty Brahadwaj will also figure in the mix, along with Harvey Palmer and Eric Yeon, who recently squared off against each other in the quarter finals of the Junior Club Championships.”

With rusted-on Pennant players Stephen Deane and Warwick Oxenford again the mainstays, Mr Grieve has predicted the 2021 Masters squad to create the ‘most interesting’ selection dilemma.

“So long the backbone of the BGC Pennant team, the influx of recently-turned 50-year-olds means the selection pool for the Masters team has deepened considerably,” he said.

“Current form will go a long way in determining who will be selected for each round and, at this point in time, I can’t give away any more than this prediction.”

But the Club Captain is adamant that despite the overall talent in all three squads, the strength of each side is based on the calibre of the individuals who miss getting a start.

“Team selection will be very difficult, with tough calls to be made,” he said.

“Some very gifted golfers will be disappointed if they aren’t selected, but this goes to show how strong our side will be, and the depth of talent from which we can select.”

Mr Grieve said that while the 2021 Men’s Pennant team would be talented and a strong showing was expected, support from Club members always played a vital role in the success of the squad.

“When our members come out and support the team, it gives the guys a massive lift and can sometimes be the difference between winning and losing,” he said.

“And winning our third Division One Flag in our past four attempts would be a magnificent way to celebrate the club’s 125th year.”

Clubs joining BGC competing in Division One in 2021 are Redcliffe, the defending Flag holder, Keperra and Pacific. BGC has not played Pacific in the Men’s Pennant for more than 30 years.