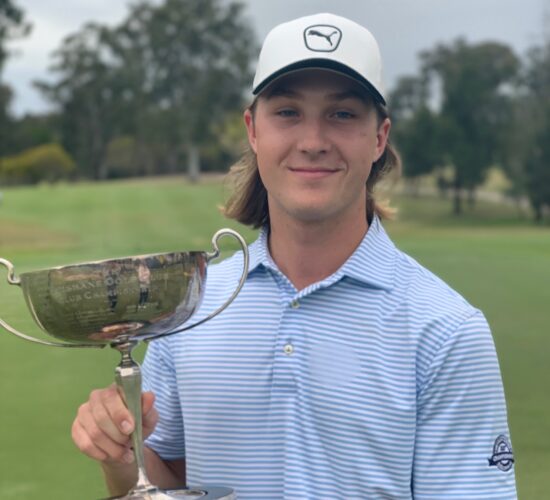 Louis Dobbelaar has won a number of significant golfing events during his young career, but few have generated the feeling of inclusion and pride as his recent win in the 2020 Brisbane Golf Club Championship.

In what was a high-quality and gripping match-play final, 18-year-old Louis prevailed 5&3 over QAS team mate Lawry Flynn in the 36-hole final. And to illustrate the exceptional standard of golf played by the youngsters, Louis was 12-under the card when the match ended after 33 holes.

But becoming Champion of The Brisbane Golf Club – one of the most prestigious and the third-oldest in Queensland – was merely one reason for the immense pride Louis felt. Not only did a large and enthralled crowd follow the golfers throughout their gripping final, but a Who’s Who of sporting royalty was on hand to congratulate him on his win.

John Millman, currently ranked 43 on the APT Tour and conqueror of Roger Federer in the fourth round of the 2018 US Open, won the C Grade Championship and Wallaby Grand Slam captain, Andrew Slack, was crowned Veteran’s Handicap Matchplay Champion. And former Australian wicketkeeper Ian Healy, also a BGC member, was on hand to congratulate Louis on his victory.

“It was actually quite a surreal feeling,” a chuffed Louis admitted.

“I have absolutely loved my five-year membership period with Brisbane. I have always felt privileged being allied to a club with such an impressive history, but it’s the camaraderie among members that makes me feel so comfortable, and welcome.”

Louis was also amazed at the level of emotional involvement from members.

“To have up to 150 people come out and follow us around in the final was quite surreal actually,” he said.

“But that is a reflection of the culture that exists at the club. To me, it seems the members are not just there to play golf, but they want to become involved in most aspects of what happens.

“It’s kind of an unspoken feeling that ‘this is our club, and we are here to support our club and our people’.”

Louis concedes that he was in a purple patch of form during the Championships, despite finishing runner-up to Lawry in the 36 holes of qualifying even though he was four-under the card. In the quarter final he beat Matt Winkley 10&8 and Samuel Slater 8&7 in the semi-final, both played over 36 holes. Lawry won through to the final after beating Greg Mitchell 10&9 and defending champion Connor Whitelock (5&3).

While international and interstate travel, and competition, has been stymied by Covid-19 restrictions, being able to play the BGC Championships was one of the unexpected positives for top-ranked Australian amateurs Louis and Lawry.

Despite his obvious class and the fact he is a member of three golf clubs, this was just the second Club Championship event Louis has played. Because of major event scheduling, it is almost impossible for talented amateurs to commit to the scheduling of club championships, which are traditionally played over multiple weekends.

Among his other major wins were the Queensland Amateur in 2018, on his 17th birthday, the Gary Player Classic twice, Queensland Junior Championship when he was 14 and the Port Phillip Amateur at Kingston Heath last year.

The full results from the 2020 Club Championships are as follows: