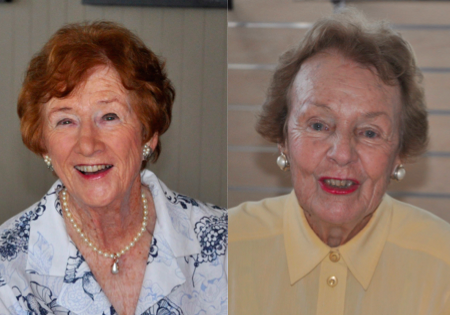 The Brisbane Golf Club is arguably in the best condition of its 120 years with the Champion greens regarded as among the best putting surfaces in Queensland.

But while the fairways and greens at BGC may well be flourishing, nothing it seems thrives better at the golf club than the lady members. Like a bottle of fine red wine, many are ageing to perfection.

Living proof of that are members Julie Cockburn and Jan Battersby, who are celebrating their 60th anniversary as club members. And despite their senior years, both are regulars in the Tuesday and Thursday competitions.

But as 60-year members, Julie and Jan are not exactly affiliates of an exclusive club. Fellow members Helen Hudson and Pat Vincent are both 65-year members, having joined in 1951, Nyrie Elcock, Norma Walker and Margaret Maher will celebrate their 60th year as members in 2017, and Lorna Murray has three more years to go to reach her sixth decade at the club. And most of these devotees still golf regularly.

Julie Cockburn, whose maiden name was Nairn, came from a golfing family in Mackay and joined The Brisbane Golf Club in 1956, shortly after starting work with The Courier-Mail. She finds it difficult to comprehend that was 60 years ago.

“It can’t possibly be that long,” she said when reminded of her approaching milestone, which will be celebrated with a special luncheon at the club on May 3.

And while she can’t remember any major disagreements or rows ‘among our girls’ during her time at Brisbane, she does recall her own run-in with the committee.

“It was back in the 70s I think, and shorts were becoming fashionable. I thought they would be ideal to wear for golf,” she recollected.

“But the Associates’ president at the time had quite a contrary view and some of us even talked about taking the matter to the Golf Union. Then Jan Stephenson, the glamorous Australian golfer, came out here and played in shorts, so the next Tuesday I wore shorts to golf.

“I was severely chastised by our president, and told not to do it again. So I didn’t – for many years.”

Jan Battersby (formerly Larking) was 21 when her mother introduced her and her younger sister Diane to BGC. Living at Ashgrove at the time, the long trip to the club involved both tram and bus travel.

And while both girls loved their golf, Jan says some of the older female members would sometimes make the game less enjoyable. But others, she recalled, took the sisters under their wing.

“I clearly remember two ladies, Miss Just and Miss McCallum, who knew all the rules, would reprimand us if we so much as looked sideways,” she said.

“But in hindsight it was good training and not only did we learn the rules, but also golf etiquette.”

And while Julie was keen to become a shorts girl, Jan was careful choosing her golfing outfits and in those formative years always wore skirts below the knee, with long socks.

For both Julie and Jan golf has been very much a family affair. Their respective husbands – Dr Keith Cockburn and Bevan Battersby – joined them as members at BGC and often as playing partners in the weekend medley competitions.

Although golf was the major drawcard of The Brisbane Golf Club for both ladies, the conviviality of fellow members has been the enduring attraction over their 60-years memberships.

“The club has offered wonderful friendship,” said Julie. “It has always been a convivial, companionable place to be.”