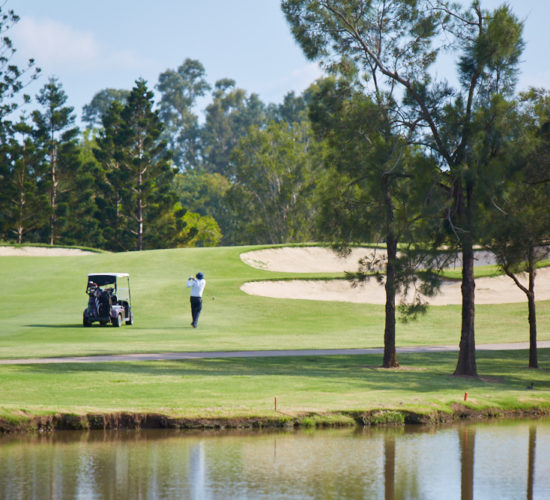 Please find following the latest news in regard to course projects, maintenance and future planning at The Brisbane Golf Club from our Course Superintendent, Mitch Hayes.

We have a new green keeper starting in late July 2017. Dale Muzzucco is currently employed at the Willows Golf Club in Townsville. He completed his apprenticeship in Townsville and upon completion he assumed the Acting Superintendent’s role for a period of 6 months. This will bring our course staff numbers to 10 full time and 3 casual employees.

The nursery on the driving range has been stolinised and is currently been grown in. This is expected to take a few months, but will be ready to supply stock needed for the patching of the greens this summer.

A new temporary tee has been built on the first hole adjacent to the practice putting green. This will be used at the Isuzu Queensland Open this year. The hole will play as a Par 4 at 350 metres.

The new temporary tee has been installed to create space behind it for hospitality purposes during the Isuzu Queensland Open. Last year our food trucks and other activities were placed on the 19th Hole and we felt this position didn’t work as well as we would have liked. We believe these activities will be more successful closer to the Club and at the main entrance to the event.

The new temporary tee construction was completed last week. I have decided to install a new cultivar of turf on it called TifTuf. This cultivar is very similar to what’s currently being grown on the new tees on 5, 13, 14 and 16, which is call TifSport. However Tiftuf will supersede TifSport due to its improved growth habit.

In a US survey, which is released every few years called the US National Turfgrass Evaluation Survey (NTEP). Tiftuf outperformed many couch grasses and was the second highest-ranking grass from the 2013 survey. The NTEP carries out several tests, seasonal colour and density; wear tolerance, pest and nematode tolerance and drought hardiness. The grass is then given a rank out of 1-9, 9 being the best. The various universities then collectively score the grass out of 100.

Tiftuf was given a total score of 6.7 and 71. Which is significantly higher than Tifway 5.8 (419 or Nallabor which we use on fairways) and Celebrations 5.2 (similar to Santa ana, used largely around Sydney and Melbourne). To summarise the survey, Tifttuf ranked better for colour and density during spring, winter and autumn, wear tolerance was also higher (as the name suggests) and nematode tolerance was similar. The biggest difference was drought tolerance, which seen a 30% reduction in irrigation requirements.

Based on the excellent results of this survey I decided to put a trial of Tiftuf on the new temporary tee. If the findings are successful this cultivar will replace TifSport as our tee surface grass, as it struggles with winter dormancy and wear.

As a point of interest, we are the only golf club in Australia with Tifttuf at the moment. However the Gabba stadium have installed it on several of their main pitches and all of their training pitches.

Last week we had a hydraulic hose burst on one of our greens mowers. Unfortunately our operator was not able to detect the leak initially and he completed 3 greens before noticing it. Those greens were 12,14 and 16.

Sadly this is something that happens periodically and there is not much that can be done other than wash the oil off the green. The machine itself is relatively new and the service schedules were up to date. Members will notice oil lines over those greens for the next few months until the temperature warms up and we can grow the lines out.

Over the next few weeks we plan to install the new course directional signage. The new signs look fantastic and will add to the class of the course.