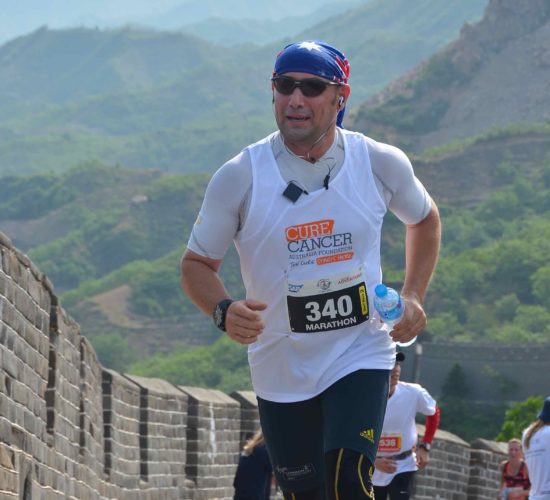 The Brisbane Golf Club member Carlo Tonini is about to join an elite group of athletes who he says could arguably be corralled into the ‘crazy people’ basket – depending on what we perceive to be crazy.

The 50-year finance broker will join 108 others in the exclusive Marathon Grand Slam Club when he competes in the North Pole Marathon in April next year. He has already been welcomed into the Seven Continents Marathon Club after conquering The Ice Marathon in Antarctica in November last year.

Since being dared by a mate back in 2010 to run a marathon, the man who declares he was never a runner has completed seven marathons on seven continents – Gold Coast (Australasia), New York (North America), London (Europe), Great Wall of China (Asia), Big Five (Africa), Inca Trail (South America) and the Ice (Antarctica).

And, more importantly, he has raised almost $200,000 for cancer research along the way.

This rather eccentric journey started for the BGC 12 handicapper as a result of ‘the most expensive beer I have ever had.’

“A mate and I were in a pub, having a beer and a yarn, when somehow the conversation turned to running marathons,” Carlo recounted.

“I must admit that at the time I didn’t look much like a runner, and when I accepted his challenge to run a marathon he almost choked on his beer.”

His first was the Gold Coast Marathon later that year and since then he has missed only one year, 2012. And, because the Ice Marathon was in November last year and the North Pole in April, he will wait until next April to join the Grand Slam Club which assists with his fund-raising efforts.

Carlo says that although he was athletic as a kid and played AFL growing up in country Victoria, he was never a runner. It was, quite simply, the challenge from his mate that started the fire within.

In fact, he says he is no great fan of running.

“No, I’ll be honest, I don’t love it,” he said, revealing he only started training for each event six months in advance.

“I run with music and without that distraction I’m not sure I would have achieved any of this. But I am driven by setting goals, and attaining them.

“And I’m the type of guy who lives to try crazy things.”

But one aspect of his incredible journey that is not crazy is his annual fundraising event, the World’s Biggest Dinner. Since he spawned the idea two years ago 120 dinners in 18 countries have raised $191,000 for the charity Cure Cancer Australia Foundation.

The notion to support a charity with his own particular event kicked in when he entered the New York Marathon in 2011 but was told that to get a start, he would need to raise $5000 for charity.

“I raised the money, felt really good about what I had done and thought this should be my modus operandi from then on,” he said.

“My wife Maree is an oncologist and the wife of a very good school friend died in 2013 from pancreatic cancer within a month or two of diagnosis, so we decided we should support cancer research. The idea of the World’s Biggest Dinner evolved from the World’s Biggest Morning Tea.

The concept is simple according to Carlo. Anyone, anywhere and at any time, can host a dinner. The dinner must be registered on the World’s Biggest Dinner website and donations deposited (dee www.worldsbiggestdinner.com for details).

When asked what his next challenge would be after he joins the Marathon Grand Slam Club, Carlo hinted he may start to play golf at BGC more than one day a week.

“I joined six years ago when my handicap was nine, and it has blown out to 12,” he lamented.

“Something a marathon runner cannot do is go the wrong way, but that is what is happening to my golf handicap.” – TONY DURKIN