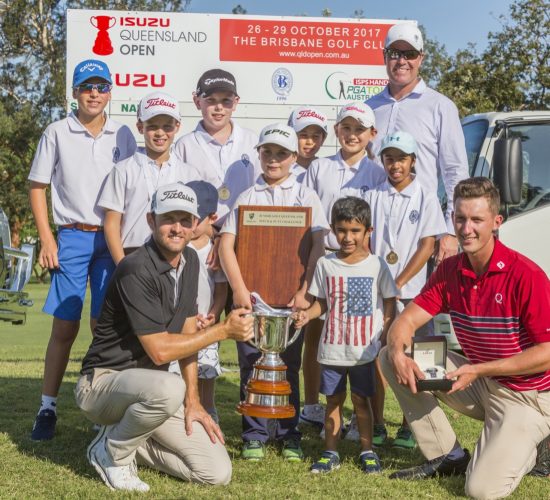 Not that he had any idea of the amount involved, but because he was an amateur Doug Klein has surrendered $7,353 in prizemoney during the past two years at the Isuzu Queensland Open.

Twenty-year-old Klein finished top amateur in the field both years, tied fifth in 2016 and tied seventh last year. And neither time did he even bother to inquire as to how much money he had missed.

But things will be different in 2018. After he has played the prestigious Keperra Bowl from October 9-12, Doug will turn professional in time for the Isuzu Queensland Open. And this time the prizemoney will be all important.

“Turning pro is something I have thought about, and hoped would one day eventuate, almost since I started playing golf,” Doug has revealed.

“I think most guys who get their game to a certain level believe that turning professional is the next step in their career. Right now, I feel my game is up to scratch and the time is right.”

But there have been times this year when the three-time Redcliffe Club Champion could have been excused for feeling a professional golfing career was merely a dream. Some over enthusiasm in the gym caused a back injury and Klein did not touch a golf club for more than two months.

“I over did it,” he confessed.

“Fitness is a huge part of the game and I always try to do the right thing to give myself every advantage. But I over loaded this time and paid the price.”

It was, however, a blessing in disguise. The fact the 2017 Queensland Amateur Champion could not train or play forced him to take a much-needed break from the game.

“Golf had become my life – maybe my obsession,” he said when revealing that for the past 18 months he had religiously worked on his game six days a week.

“In fact, it was probably more like 6½ days a week. And when I wasn’t practising or playing, I was working in the Prop Shop at Redcliffe. In hindsight, I needed the breather.”

And the lay-off did not hamper his game. In his first tournament back – in August – he finished fourth in the Queensland Men’s Stroke Play at five-under, just three shots behind winner Jordan Garner. His four-round 287 featured a phenomenal 17 birdies.

That barrage of birdies then continued in the first round of the following match play for the Queensland Amateur title when he and fellow Queenslander Chris Crabtree fired 14 between them before Crabtree saluted, one-up.

“Obviously I was a little underdone game-wise, so I was pleased with the way I played and the result,” he said.

Klein will play just more amateur tournament – the Keperra Bowl – before he turns professional. He will then line up in the Isuzu Queensland Open – to be played at The Brisbane Golf Club from November 1-4 – for his first crack at a purse.

And he says he could not want for a better tournament for his debut.

“My past two performances there shows that I like the course, and that it suits my game,” he said.

“And while it will be different playing for money, I can’t imagine the added pressure will affect me too much.

“My game is in good shape and I know I’m ready to strap on the boots.” – TONY DURKIN