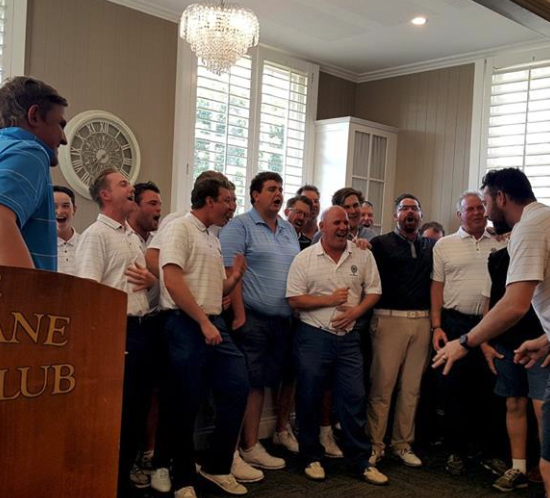 The Brisbane Golf Club returned home for the first time in 2017 and delivered a strong performance to defeat Oxley Golf Club 16-5.

The win keeps BGC well placed to win the Division 1 BDGA Pennant and also most likely ensures the Club will finish in the top three on the ladder and avoid relegation to Division 2 next year.

Click here to see the Photo Album from Round 3.

Oxley Golf Club came to BGC looking to get their season going after losing both of their opening matches and a tough match was always expected. Equally BGC were looking to protect their outstanding home record from recent years.

Our Opens secured 8 wins from a possible 11 with Lawry Flynn (1 up), Louis Dobbelaar (2&1), Jacob Clarke (3&2), Lewis Clelland (5&4) and Tom Deane (Sq) all securing their first points of the season. Kurt Carlson (4&3) made it two wins from two starts, Eugene Estella (2&1) continued to press hard for rookie of the year honours, Scott Bretherton again fought hard to win 3&1 and Jordan Lett made a fantastic birdie on 17 to get his match back to square.

It was the best performance of the year for our Opens and we look forward to seeing this form continue over the remaining three rounds.

Our Juniors were strengthened by the return of our Queensland Schoolboys Champion, Sam Slater along with Ben Stieler, who finished runner-up at the same event, and Bailey Ittensohn. Jordan Hampson (6&5), Dylan Barraclough (7&6) and Ben Steiler (7&6) recorded big wins whilst Bailey Ittensohn (3&1) was also a convincing winner.

The number 1 match between Sam Slater and Dragon Chai again showcased the high standard of golf played in the Juniors and was eventually won by the away team 3&1.

Our Masters continued their undefeated season winning 4-1 and as a result, remain well placed to the win their Pennant for the fourth consecutive year. Brett Kinninmont (7&6) and Gary Brodie (6&5) were again dominant at home whilst Stephen Deane (1up) and Nick Woodley (2&1) produced valuable wins.

The atmosphere during the match was fantastic and the support the team received from Members who either caddied or were spectating was greatly appreciated.

The Brisbane Golf Club is home again this week against Nudgee Golf Club on Sunday, 6 August 2017. After three rounds both teams are tied on points but with a superior number of matches won BGC is outright second on the table. The teams couldn’t be separated two weeks ago.