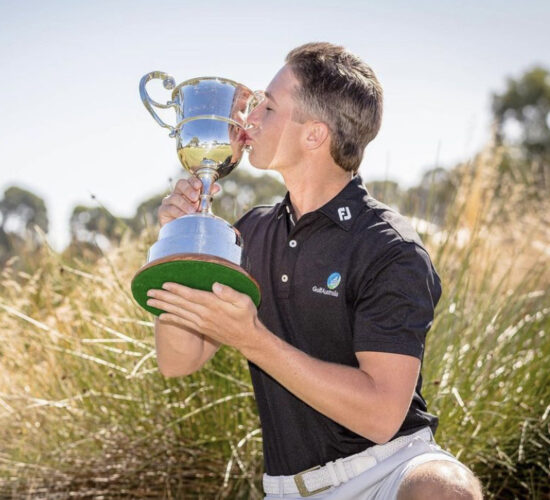 The 19-year-old, who shares membership with BGC, Brookwater and Royal Wellington (NZ), came from five shots behind at Adelaide’s Kooyonga Golf Club on Friday to win by two. He was the only player in the field to shoot four under-par rounds – 69/71/68/70, for a 10-under 278.

Louis won The Brisbane Golf Club Championship in July last year in a high-quality and gripping match-play final, prevailing 5&3 over QAS team mate Lawry Flynn in the 36-hole final. The exceptional standard of golf played by the youngsters was exemplified by the fact Louis was 12-under the card when the match ended after 33 holes.

And although Friday’s final round of the Australian Amateur may not have produced such a runaway win, the drama was high octane.

South Australia pin-up boy Jack Thompson, who was runner-up in last year’s Queensland Open, started the final day with a five-shot lead and a big local gallery of expectant fans. But Thompson, playing with Louis, started with three successive bogeys while the new Champion remained steady with pars, one of which was a four-metre down-hiller for a sand save at the fourth.

“And so was the clutch putt for par at 14 after I had shot my first a couple of metres past the hole.”

But it was at the 17th that the tide turned dramatically, with Louis nailing a brilliant birdie when a shot in front. Thompson twice found the water for a quadruple bogey and ultimately signed for 82, 17 shots worse than his course-record 65 two days earlier.

Louis won by two shots from Sydney youngster Jeffrey Guan who, at 16, is a year older than the BGC Champion was when he won the New Zealand Amateur in 2016. His final round 70 typified the steadiness of his golf during the Championship, with three birdies and a lone bogey.

And in the pressure cooker of the final round of Championship golf, Louis thanked his caddy and good friend, Will Bruyeres, who he said helped him relax. Will was also on the bag for the match play round of the BGC Championship.

The past six months has been gigantic for Louis. He has added the Australian Amateur to the Tasmanian Amateur, the Port Phillip Amateur and his second Queensland Amateur title.

And he has racked up these outstanding wins minus his once-trademark long hair. A decision in December to shave his head for charity not only gave him a completely new look, but raised just on $10,000 for a charity close to his heart.

Reflecting on the historic win and holding a trophy which is one of the oldest and prestigious in Australian sport, Louis said the achievement might take a while to ‘sink in’.

“I played some pretty good golf at times this week and I know how well Jack and others played, so I’m pretty excited to have my hands on this prestigious trophy,” he said.

“And to be hold I am the first reigning Club Champion at Brisbane in 125 years to win the Australian Amateur is such an honour and a privilege. I am very proud of that achievement and grateful for the continued support of the club and all the members.” – TONY DURKIN