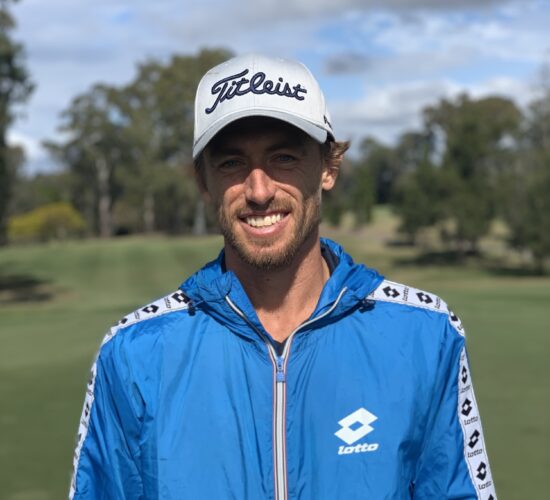 Like many professional sports people around the world, Brisbane tennis ace John Millman became increasingly frustrated with the travel restrictions enforced because of Covid-19.

But the World No.43 ranked ATP Tour player made the most of his tennis downtime, turning his attention to another sporting interest – golf. And following last weekend’s round of finals, Millman is now C Grade Champion of The Brisbane Golf Club.

A Brisbane Golf Club Ambassador for the past two years, Millman also won the A.H. College Trophy for the best net score in all grades over the first two rounds of qualifications. And within that week of competition his golf improved by a remarkable nine shots – he returned a net 76 in the first round, followed by 67 seven days later.

Then, things went from strength to strength for the 31-year-old who had never previously played any serious golf.

On the way to his first-ever golf championship trophy, Millman beat Robert Strutt 4&3 in the quarter final and David McGregor 5&4 in the semi, before taking out Brendan Adams 5&4 in the final. All matches were scheduled for 18 holes.

“It started out as a bit of fun, but I must admit things became very competitive when matchplay started,” said the 16-marker.

“Because competition tennis was not possible, I decided to get in some golf and before the Championships I was playing a couple of days a week. And even though it was predominately for fun, I must admit I was playing better and enjoying the competitive side.

“When the Championships became closer, I stepped up the preparation and apart from those couple of weekly comp rounds, I found myself on the range quite often. I really enjoyed the experience and I played some good golf too.”

A friendship from school with TBGC members, brothers Tom and Michael Deane, was the catalyst for Millman first becoming a Brisbane Ambassador, and then contesting the Championships.

“Any time I was back in Brisbane from overseas competition and Tom was playing Pennants for Brisbane, I would caddy for him,” he said.

“Luckily for me, he repaid the favour in the final. And I reckon he was worth a few shots too, because his ability to read the greens was really helpful.”

A somewhat-embarrassed Millman revealed that as a kid he was always dubious of players who turned up to tennis kitted out in all the latest gear. Usually, he assessed, they were all bark and no bite.

“But I must admit I am guilty of that now with my golf equipment,” he confessed.

“I have Titleist AP3 clubs, Vokey wedges and a Scotty Cameron putter. And, a state-of-the-art range finder as well.

“At the time I wondered whether it was a good investment. On reflection, maybe it was.”

While Millman is justifiably proud of his most recent sporting achievements, what has given him the biggest thrill is having his name etched on The Brisbane Golf Club Honour Board, twice – one for the C Grade Championship and also for winning the A.H. College Trophy.

But with the US Open scheduled for late August, his dalliance with golf may soon be over – for the time being at least. Millman obviously has bigger fish to fry than the fellow members at his favourite golf club.

His biggest tennis win has been upsetting five-time champion and World No. 2 Federer at the 2018 US Open, to reach his first Grand Slam quarter final. However, his heroics against Brazil in the Davis Cup semi-final in Adelaide in March typified the fight in Brisbane’s new C Grade Champion.

A day after coming from a set down to win his opening singles rubber, Millman repeated the feat to down Brazil’s No.1 ranked player in a three-set thriller that was decided in three tie-break sets. As a result, Australia has qualified to play the Davis Cup final against Spain, which is scheduled for November.

And while there was no comeback needed in the matchplay final after John had jumped to a lead after four holes and was never headed, that renowned fighting spirit was still clearly evident in what may very well become his new sporting domain.– TONY DURKIN