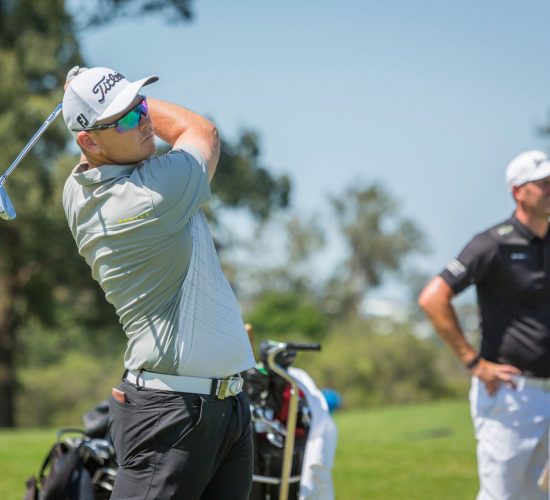 New Zealander Kieran Muir openly concedes his professional CV does not reveal too many highlights, and his No.1252 World ranking won’t turn many heads.

But he is buoyed when his thoughts turn to the Isuzu Queensland Open, and in particular The Brisbane Golf Club. His second-best result as a seven-year pro was at last year’s event.

Rounds of 75-66-69-66 for a tied second result, one behind winner Michael Sim, has the Kiwi heading back over the ditch with wind very much in his sails.

“I just love those Brisbane courses,” said Muir who has played twice at Brookwater and twice at Brisbane, albeit with mixed success.

“Brookwater is a fantastic course, really tough and a genuine golfing challenge. Brisbane, conversely, is a thinker’s golf course where position of the tee is absolutely vital.”

One of eight New Zealanders playing the Isuzu Queensland Open at The Brisbane Golf Club from November 1-4, the 30-year-old from Omokoroa, near the Bay of Plenty, says the layout is difficult to attack.

“The course is relatively short, and the greens are hard and fast but beautifully true,” he said.

“There aren’t too many chances to attack, so to score well you have to be patient, something I wasn’t in my first round there last year.”

Muir, who admitted expectations may have taken control during his first round in 2017, was five-over par through 11 before steadying to shoot 75. He then signed for 17 birdies in his final three rounds and is eager to get back on the course and hopefully go one better this time.

But the good scores from last year, and his liking for the course, is not the only reason he feels good about getting back to Brisbane. A local family has ‘adopted’ him and makes the Kiwi feel very much at home.

Australian Legends Tour member and fellow professional, Gary Bruyeres, has opened his Brisbane home – and more – to the winner of the 2017 Fiji Open.

“I met Gary at a tournament a few years ago and he and his wife Anthea have literally given me a home away from home,” Kieran revealed.

“This will be the third year in a row I have stayed with them and not only do they offer me somewhere to stay, but they look after me like I am one of their own. Gary gives me the key to his house, his ute and he also caddies for me.

“And people wonder why I love going to Brisbane to play the Isuzu Queensland Open.”

But before he arrives in Brisbane Kieran has some other commitments in which he hopes to fine-tune his game.

“By the end of the year I reckon I will almost feel like I’m an Aussie,” he quipped.