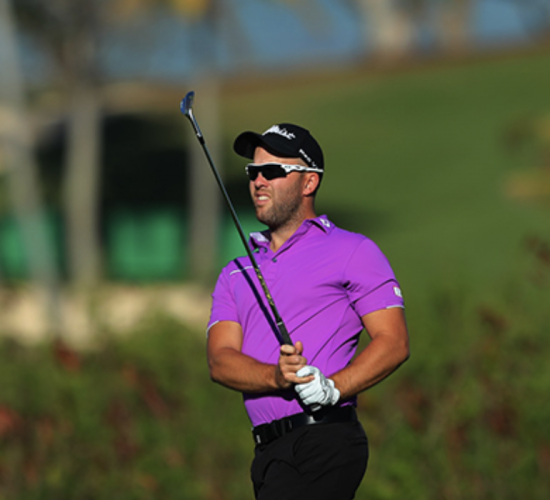 Daniel Nisbet grew up in a house that backed on to a golf course, has been playing the game since he was eight years old and is one of those rarities who has broken the magical 60 mark.

Yet despite some outstanding recent victories and his current standing as No.1 on the Australian Order of Merit, Nisbet concedes the upcoming Isuzu Queensland Open has been his bogey tournament.

“I regret to say that in the past the tournament has had my number,” said the 28-year-old who honed his skills on the fairways and greens at Caboolture, the home course of Rod Pampling.

“I have played the event at both The Brisbane Golf Club and Brookwater, and have no idea why I have never been able to have much success. My memories of the tournament are not great.”

But, hopefully, that is about to change when a more self-assured and injury-free Nisbet tees it up in the 94th Isuzu Queensland Open at The Brisbane Golf Club from November 1-4.

Coming off two outstanding wins in what he says is ‘absolutely’ his best year since he turned professional in 2012, his confidence in his game is at an all-time high. And while varied, and at times demanding, his preparation gives him the best chance to conquer his nemeses this year.

“I have been playing in Asia most of the year and my schedule has been pretty heavy,” he said.

“I’ve played a dozen tournaments up there under varying conditions and the experience, while not always enjoyable, has been good for my golf. Now I’m home and really looking forward to playing the eight or nine events in Australia to finish the year.”

While Asia was his home for much of the year, it was in Australasia that the former Australian Schoolboys champion scored his two biggest wins – the New Zealand Open and the Northern Territory PGA Championship. And both were stunning victories.

The New Zealand Open back in March, which earned him his biggest-ever purse of $191,000, is his greatest triumph to date. Not only did he carve up the world-class Millbrook Resort course with a final-round 62 to finish at 27 under, but he broke the tournament-record score held by fellow Aussie Rodger Davis since 1986.

And five months later, at the Palmerston Golf Course, he again stormed home with an eight-under 63 to win the Northern Territory PGA Championship, this time at 19 under.

“Most people consider Saturday as moving day in a four-round golf tournament, but for me it seems to be Sunday,” he said.

But as he shakes off a nagging shoulder injury and heads to Victoria and Western Australia to warm up for his Isuzu Queensland Open ‘comeback’, he doesn’t care which day he ‘moves’ at The Brisbane Golf Club.

“Obviously every tournament I play I want to do well, and win,” he said.

“But if I had a preference to turn the clock back to the form of my two big wins in New Zealand and NT, I would like that to be at the Isuzu Queensland Open. For every golfer there is something pretty special about winning our home state’s Open.”

And if he can prevail at Brisbane in November it will help strengthen his position at the top of the Australian Order of Merit, which caries with it some massive bonuses.

“The winner gets a European Tour Card and the top three gain an exemption into the final stage of the 2019 Web.com Q School,” he said.

“So, there is a lot to do, and a lot to play for. And I feel I’m really ready for the challenge.”

The 2018 Isuzu Queensland Open will be played from 1 – 4 November at The Brisbane Golf
Club. Visit the website for more information. – TONY DURKIN