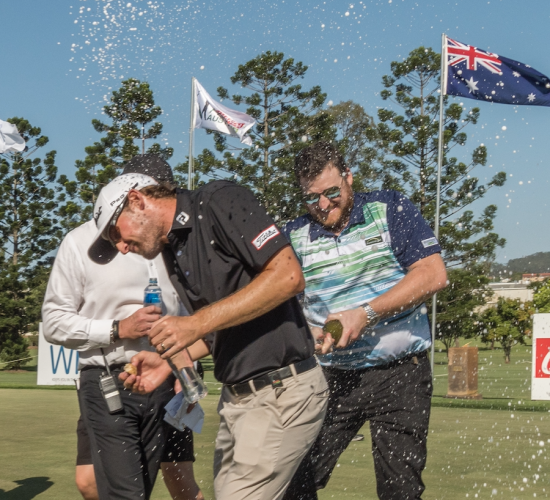 When reigning Isuzu Queensland Open champion Michael Sim anointed good mate Aaron Pike to hold ‘honorary defending rights’ for the 2018 tournament, both knew the declaration was made in jest.

But the big red-beared Queensland resident feels much more confident about the challenge following his breakthrough win in the Victorian PGA Championship at RACV Cape Schanck Resort last weekend.

Pike signed for a four-round total of 270 (71, 65, 66 and 68), with his 10-under total beating New Zealander Ryan Chisnall by a shot and giving him his first major-tour victory. And while the $15,000 cheque was most welcome, he says the bonuses that come with it far outweigh the cash.

Pike now has full exemption on the ISPS HANDA PGA Tour of Australasia until the end of the 2019 season, as well as automatic entry into four co-sanctioned tournaments with the European Tour and Asian Tour.

But first he has to tee it up at The Brisbane Golf Club from November 1-4 in the Isuzu Queensland Open as not just the pseudo defending champion and a local, but now among the more fancied starters.

“Michael (Sim) and I are good mates, have been for a while,” explained the Western Australian-born Pike who now calls Brisbane home but spent much of his childhood in the Northern Territory.

“I missed all of last year because of a back injury and caddied for Michael in half a dozen tournaments. I was actually standing alongside the 18th green with a bottle of champagne to spray on him when he won at Brisbane last year.

“Last week we roomed together for the Vic PGA and it was then he told me he would miss the Isuzu Queensland Open because of a commitment in Japan. He said I had to represent him as the defending champion. ‘You’re gonna have to defend it for me’ he demanded of me.

“Knowing it was said in jest, we both had a chuckle. But after my win, against a pretty hot field, maybe I can do him proud. And really, I now feel as though I don’t have an option.”

Pike, who has been on the tour since 2008, is feeling on top of the world following an exceptionally enjoyable month.

A massive fan of the West Coast Eagles, he was in Queensland’s wine district of Stanthorpe at a mate’s wedding on AFL grand final day and was treated like royalty at the reception.

“The wedding was held on the family farm, and the hosts set up a TV so I could watch,” he said.

“Seeing the Eagles win was tremendous, and gave me a big thrill. The win at the weekend has given me confidence, and a real boost. I’m actually feeling pretty darn good at the moment.”

But while he looks forward to representing both himself and his good mate Michael Sim in the Isuzu Queensland Open, he remains cautiously optimistic about his chances on layout he describes as ‘really strong’.

“I like Brisbane. It’s a genuine test of golf and never lets you forget you are playing a tough golf course. I played some of my best golf last weekend, so I’m looking forward to testing myself on a very different style of course.”

Pike said he had played The Brisbane Golf Club layout two weeks ago and suggested the recent spate of rain should have the venue in superb condition. – TONY DURKIN