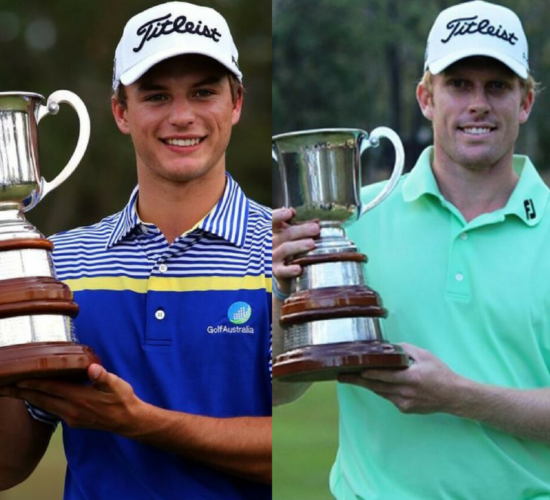 The names on the TB Hunter Cup read like a who’s who of Australian golf and that shouldn’t come as a surprise.

That’s because dating back to 1925 the Queensland Open has attracted the cream of the professional and amateur crop.

For many, including two recent winners – Andrew Dodt (2014) and defending champion Brett Coletta – winning the Queensland Open has been a career highlight.

“Winning the Queensland Open is one of my proudest achievements”, Dodt said.

“I remember very clearly looking at the names on the trophy (TB Hunter Cup) at the pro-am lunch and thought ‘I really want my name on the trophy’.

“I don’t think I have played a tournament with so much desire to win.

“I’m proud my name is on that trophy and it’s definitely a highlight win in Australia,” the 31-year-old added.

Coletta, 21, says his victory last year has opened doors including status on the PGA Tour Canada.

“So far it’s my career highlight,” he said. “Any professional win while playing as an amateur shouldn’t go unnoticed.

“Winning the Queensland Open was massive because a couple of weeks before that I had a good opportunity to close out the Asian Amateur and I let that slip through my fingers.”

That cost him a spot in the US Masters, but he learned much from the experience.

“Knowing I was playing well enough to capitalise on what I had been working towards and getting another opportunity so quickly and be able to close it out did wonders for my confidence,” he added.

A star player of the future, Coletta’s goal is to join his idol Adam Scott on the US PGA Tour.

The Melburnian is just one of a number of new breed young Australians taking on the world along with Curtis Luck and Ryan Ruffels.

They have been able to do this with confidence because of opportunities to play four-round tournaments like the Queensland Open while amateurs.

“A tournament like the Queensland Open is extremely important,” Coletta stated. “It gives that insight into what professional golf is like.

Dodt, who plies his trade on the European Tour, agreed.

“For the likes of the younger professionals coming through, tournaments like the Queensland Open are really important,” he said.

“It’s definitely a stepping stone to bigger things, but it’s important for tournament golf in this country.

“I’m a proud Queenslander and winning the Queensland Open was definitely a goal of mine.”

Dodt, who turned professional in 2007, believes his best golf is ahead of him.

“I want to make hay while the sun is shining in the next 10 years,” he said.

“They say golfers peak in their 30s. Well, I’m 31 and feel I have a lot of experience under my belt. I have played a lot of tournaments so I feel like I can put my best foot forward and really climb the world rankings.

Dodt, who spends 25 weeks a year travelling and playing on the European Tour, resides in Newcastle with his wife Ashleigh.

Still, he wouldn’t have it any other way.

“I love playing the European Tour, I love travelling but at the same time I love being at home in Newcastle,” said Dodt, who grew up on a farm at Gatton 90km/s west of Brisbane.

“I’m a pretty lucky guy. I’m playing the European Tour, I’m married to a great girl, I have a great family and I have been blessed and lucky.”

The date clashed with the rich WCG-HSBC Champions tournament in China.

Still, Isuzu Queensland Open defending champion Coletta will be in Brisbane to defend his title.

“I definitely will defend my title,” said Coletta, who has an intimate knowledge of the Brisbane layout.

“We played the interstate series there last year and I played eight rounds in six days so I know the course.”

Then there was the Queensland Open pro-am and another four tournament rounds. For the record, Coletta carded rounds of 67-69-67-70 for a 273 total – one of the lowest winning totals in the tournament’s history.

So what can the golfing public expect from the defending champion?

Well, you might be “freaked out” by how far this young man belts a golf ball.

“I sometimes freak myself out how far I can hit it,” Coletta said without a hint of arrogance.

“Length-wise, I’m not the biggest guy out there but I can keep up with the bigger guys. I have always had that x-factor, but sometimes I still freak myself out.”

Most memorable golfing moment: 2015 medallist at US Amateur

Career low round and where: 61 – Sandhurst Club (champions course)