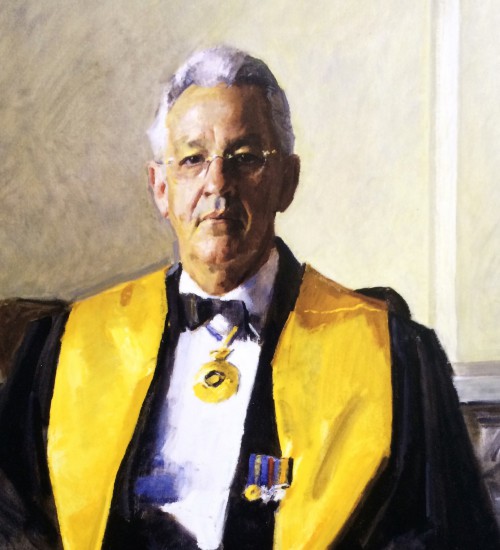 Professor Russell Strong is a world-renowned surgeon who specialised in liver surgery; his groundbreaking work saving thousands of lives and placing the Liver Unit at Princess Alexandra Hospital at the forefront of world practice.

Russell has been a member of The Brisbane Golf Club for over 35 years, and jests that 20 years of membership primarily consisted of him “driving past the club gates every day” on his way to work, too busy for regular rounds.

As a boy, however, Russell had his sights firmly set on being a sportsman.  And his life may have taken a different path if it were not for his mother’s response to a poor report card, which realigned his focus.

“I still remember the details of the report card clearly, and mum standing there reading it out”, Russell said.

It stated: “This boy will never get anywhere, he is too interested in sport”.

“It was like red rag to a bull; I was determined to prove them wrong”.

“I had inherited my mother’s determination and the report card, and her disappointment, gave me the impetus to work harder and try to achieve something”.

As one of four children, Russell recalls his family making many sacrifices to afford his education.  He qualified for a bursary in high school and then a Commonwealth Scholarship to University, hitchhiking to Sydney for his studies in dentistry.  He met his wife Judith, a pharmacist, and then (what Russell describes as) “their 13 year honeymoon” in the UK, where he trained in medicine and then with some of the country’s esteemed surgeons and added two daughters to his family.

He was honoured by Her Majesty, Queen Elizabeth with a Companion of the Order of St Michael and St George in 1987 and received Australia’s highest honour, the AC, in 2001.  In the same year he received the prestigious Centennial Prize of the International Society of Surgery in Brussels and subsequently received many international awards including an Honorary Fellowship of the Royal College of Surgeons of Edinburgh in 2002 and an Honorary Fellowship of the American College of Surgeons in 2008 and was Knighted by the King of Malaysia in 2010 for his work in surgical education, endowing him with the official title, Professor Datuk Dr Russell Strong.

Russell’s portrait hangs in the Russell Strong Auditorium at the Princess Alexandra Hospital where he retired from the role of Director of Surgery in 2003, after 30 years of practice at the hospital.

Although he no longer practices surgery, Russell is a prolific writer, mentor and editor, with much of his retirement thus far dedicated to his passion for lecturing and examining in Malaysia, and his international editorial commitments.  His international obligations having him travelling internationally on a regular basis.

Surgical retirement has also given him the opportunity to play his role as a grandfather.

When he isn’t travelling, Russell’s home is a Tennyson apartment that overlooks The Brisbane Golf Club, its visible flags a constant reminder that his beloved sport beckons only a stone’s throw away.  On the occasions that Russell has managed to dust off his clubs, he took to the course as though he was a frequent player, winning the B grade championship in 1983 and also won the C grade championship in 2006, on the way defeating former cricket great – and fellow Lismore High School graduate – Sam Trimble.

In 2012 Russell told the Northern Star that he defined success as a journey – not a destination and that it is best measured by the obstacles that have been overcome.

“That is your obligation.  You don’t always succeed and that is tough.  But you try.  Sometimes I think I am mediocre.  What worries me is people tend to accept the lower standard than is normal.  If you do that, then you are a failure in medicine”.

“You don’t know the background or the circumstances of everything.  But, you can do the things you can do and you do your best with what you have and that is important”