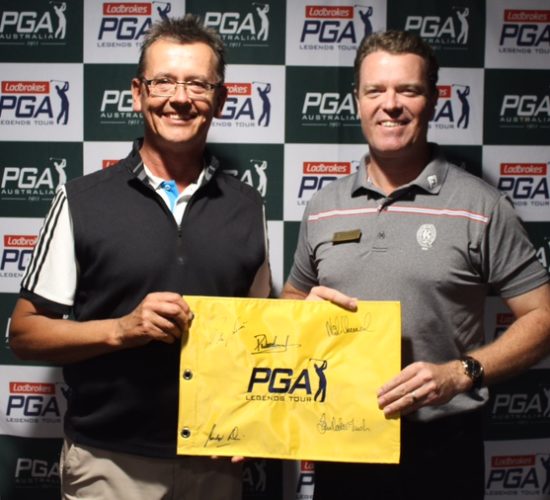 Last-minute putting advice from his son was the trigger for Victorian-based professional Peter Woodward to shoot five birdies and win yesterday’s PGA Legend Tour event at The Brisbane Golf Club.

The fourth staging of the Legends ProAm at Brisbane was sponsored by Queensland based Industry Superannuation Fund, Club Super, and administration and management services provider, IFAA, and attracted a field of 120 in perfect conditions.

In just his third year as a professional, it was Woodward who prevailed with a three-under 69 to win by a shot from the trio of Simon Jagot, Brad Burns and Stephen Herbert. And even though one of his two bogeys – on his final hole – was a three putt, Woodward said his putts during the round had rolled beautifully.

“I had 29 putts and I must thank my son Ryan for helping with my set up,” he acknowledged after his round.

“The greens in Victoria are considerably different to Queensland, where they tend to be much grainier. And to get the ball to roll properly, the angles at address need to be right.

“Ryan, who now lives in Queensland, had noticed something awry in my set-up and his advice really helped. We had nine holes together on Saturday evening at his home club of Redcliffe and then on Sunday night he gave me a putting lesson on the carpet.”

But Woodward thought he had blown his chance of winning his fifth Legends Tour event with his only three putt of the day, on his final hole, the par-four second.

“Last year I three-putted my final two holes to lose by a stroke, and I really thought that three putt at the last was going to cost me again,” he said.

“But it didn’t, and that was such a relief.”

A former furniture upholsterer who spent many years caddying for his cousin, Robert Allenby, Woodward loves the Brisbane course, and the Queensland weather. In fact he rates the Brisbane Golf Club one of the top courses in Australia.

“The layout is great. It is a risk and reward course and I can’t imagine anyone ripping it apart,” he said.

‘Apart from the outstanding condition of the course and the excellent roll on the Champion greens, it is a technical course. You can’t just go out there and smash the ball around – you have to position your drive and think about the shots you play.

“The challenge is relentless, and that is why I like the course so much.”

Woodward said that in many aspects the Brisbane course reminded him of Yarra Yarra, where he is a long-time member.

“The course reminds me of home, but not the weather,” he said.

“A few weeks ago I played Yarra Yarra early in the morning and it was minus one. There was still frost around the bunkers. Up here in winter it is swimming weather.”

The celebrity event was won by singer Luke Kennedy, a member of the Ten Tenors.

Managed by the PGA of Australia, the Ladbrokes Legends Tour is the Professional golf circuit for golfers aged 50 and over. Just on 70 tournaments operate throughout Australia and New Zealand, with almost $1 million in prizemoney on offer each year.

The tour rolls continues at Mt Warren Park on Friday, and Peter Woodward will return to play in the $25,000 Queensland PGA Championship at Wynnum Golf Club on Monday and Tuesday, August 7 and 8. – TONY DURKIN