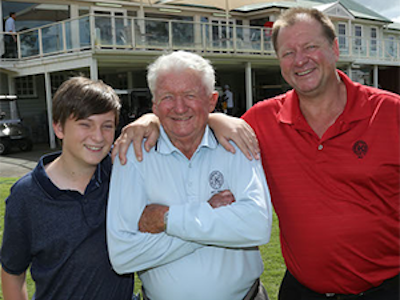 Sam Trimble reckons he’s hit more scores over 100 playing golf than he did during his colourful career as a dashing right-hand opening bat for Queensland.

“I think I can get more hundreds playing golf than I did playing cricket,” jokes Sam, an aggressive power hitter who played 144 first class games for Queensland during the 60s and 70s.

Now 80, Sam is a member of The Brisbane Golf Club and plays golf off a handicap of 24 these days.

And, just as he did as a cricketer, he still loves nothing more than belting the cover off of the ball – this time  a little white one — not a big red cherry coming at his head at around 150km per hour.

Like many of us, Sam thinks hitting that little stationary white-dimpled ball is harder than it looks.

“I enjoy playing golf, I enjoy the challenge of hitting that little white ball, I’ve always been a hitter,” he says.

“But when I was playing cricket I could cut the ball, chop it, edge it, you can’t do that with a golf ball, can you?”

These days Sam is happily retired.

He spends as much time as his can with his family and his grandchildren who keep him pretty active when he is not out on the golf course.

“My memory is not real good,” says Sam before we chat about cricket and golf.

By the end of our interview, I can tell you his recall is a lot better than he thinks.

“Brisbane is a very good course, challenging,” he adds when asked what he likes most about being a member of The Brisbane Golf Club which is ranked in Australia’s top 100 courses.

“I like the competition, the social aspect, the members, there’s plenty of old cricketers and I enjoy the course as well.

“My son Glenn (also a powerful batsman who played for Queensland) and my grandson, Sam (number four on the Trimble tree) are also members there.

“It’s not too far away from where I played my cricket for Western Suburbs at Graceville Oval before I played for Souths.”

Trimble, who hails from Lismore in NSW, used the Bradman theory when he batted:  “hit it along the ground and you can’t  get out”.

His swashbuckling style saw him amass a career tally of 10,282 runs at an impressive 41.79 – a record which stood unchallenged for Queensland until Stuart Law eclipsed it during the 1990s.

Even in his later years Slammin’ Sam still loves to give  the ball a decent nudge.

“I’m hitting it a few hundred metres,” he says.

“I’d give Greg Norman a go at a long drive if he gives me a start,” he adds with a laugh.

Trimble wore the baggy green, touring the West Indies with the Australian cricket team in 1956 but despite his impressive figures with the willow, never played a Test.

“I was the third opener on that tour and at the time Bill Lawry and Bob Simpson opened for Australia, he says.

Sam talks of the two former Australian captains with great respect. In reality Sam’s average was good enough to open and the late Richie Benaud wrote on a few occasions that Sam should have been playing.

The reality was that Lawry and Simpson were selectors on that tour and they weren’t going to drop themselves.

In the last test on that tour Sam was named the 12th man and maybe that was Lawry and Simpson acknowledging the fact they were both very fortunate to have kept Sam out of the team.

BEST GOLF SHOT: I had a hole in one at the old Brisbane 7th some years ago.

FAVOURITE HOLE:  They all offer different challenges but I think it will be the new eighth hole where they are putting in a water feature.

BEST ROUND: I played the front nine to par at Brisbane once, that’s the best I have ever played.

WHAT DO YOU ENJOY MOST ABOUT GOLF: I like the feeling of making a par or even a birdie, the satisfaction it gives you. I still like to hit them a long way and see how far they go.