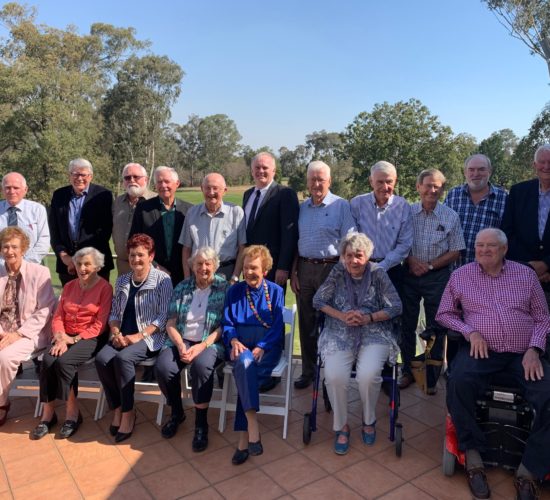 Such was the significance of the founding of The 1896 Club to remote member Ross Hunter, that he flew from Townsville to attend the inaugural luncheon on September 13.

And 88-year-old Helen Hudson, who has been a member of The Brisbane Golf Club for 67 years, said all the money in the world would not have tempted her to miss the historic event.

The 1896 Club was recently established to recognise and reward The Brisbane Golf Club’s longest-serving members.

Each year BGC will distinguish members who have achieved 50 years of membership in any category by inaugurating them into The 1896 Club. The incoming members will be announced at the annual presentation and prizegiving event.

Each year, as was the case on September 13, all members of The 1896 Club will be invited to a special luncheon, hosted and provided by BGC, to celebrate their membership.

“Not only are we recognising stalwarts of this great golf club but having them tangibly involved helps us maintain an important and valuable link to our wonderful past,” said current President Mr Phil Wikman. We also hope we are inspiring our wide-range of active members to one day become eligible to join this very exclusive fraternity.”

The 1896 Club inaugurated 31 golfers who have been members of BGC for more than half a century. The longest-serving of those members is Mrs Pat Vincent, who joined in 1951.

Like Pat, 12 of the 31 inaugural members have been members of BGC for more than 60 years. Helen Hudson, has been a member for 67 years and is still active on the course and in the Club.

“I believe I am the longest continually playing lady member of the club,” Helen proudly declared.

“In the 67 years since I first joined, I have only stopped playing during my four pregnancies.

This gesture by our club to recognise long-term members is typical of the great work the committee is doing.”

“It is wonderful to be recognised and the entire luncheon served was just beautiful.”

Ross Hunter said he had no hesitation in attending the inauguration luncheon when the invitation arrived. The recently retired doctor, who has lived in Townsville since 1976, said it was the Hunter family lineage that had enticed him back.

His grandfather was T.B. (Tommy) Hunter, who joined BGC in 1908 and was secretary of The Brisbane Golf Club from 1910 to 1939 and one of the first office bearers of the Queensland Golf Association (now Golf Queensland). The T.B. Hunter Cup, named in his honour, has been presented to the winner of the Queensland Open since 1939.

“My grandfather passed away before I was born, but I have been reliably informed that he was regarded as someone who had a bigger impact on the development of the golf club over a longer period of time than any other member,” Ross said.

“I started as a junior in 1969 and my father Ray and mother Elvie were members, my uncle, Bob Nixon-Smith was secretary manager, his wife Joyce (Hunter) was also a member, as was my uncle Norm Hunter. Obviously, we had a very strong family association.

“Because of that I have maintained a membership ever since. I believe the establishment of The 1896 Club is a wonderful recognition of long-time members and my intention is to attend all functions regularly.”

Ross was one of three members, along with John Rogers and Patricia McKeon, who reached the 50-year membership milestone in 2019.

The long-term membership recognition does not stop at 50 years. In February TBGC will also salute those golfers with 25 years membership, presenting them with a commemorative bag tag. – TONY DURKIN