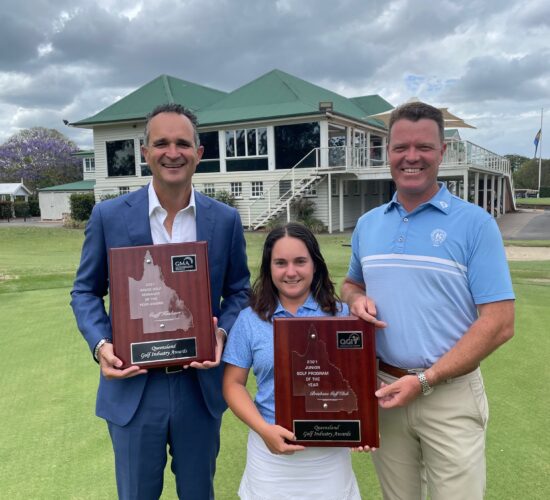 Chief Executive Officer, Geoff Kuehner, was named Club Manager of the Year while BGC    beat 16 other finalists to be crowned winner of the MyGolf Junior Program of the Year.

BGC president, Mark Deuble, said the awards were a reflection of the efforts of the hard-working and extremely-capable staff employed by the club.

“It is fantastic that our CEO, Geoff Kuehner, has been recognised for his tireless efforts and he truly has his finger on every pulse within the club,” he said.

“And I am especially proud of the Junior Program award, and that reinforces the club’s vision to become the ‘Destination Golf Club’ for all aspiring juniors in South-East Queensland.”

Director of Golf Joe Janison described the Junior Program award as a ‘nice surprise’ considering the quality of the opposition, but said it was no doubt the result of a concerted endeavor four years ago to boost the number of juniors at the club.

“We now have 130 junior members at our club, an increase of upwards of 50 since we launched our Junior Academy in 2017,” he said.

The Junior Program, under the direction of the Director of Golf, is conducted by Assistant Professional Asha Hargreaves and PGA Associate Tyla Vinter. The Junior Academy currently has more than 60 members who receive weekly coaching sessions.

“Asha started her PGA Traineeship at the Club four years ago and one of the real attractions for us was her desire to concentrate her coaching on ladies and junior golfers, which were specific areas we continue to develop,” said Joe.

“In those four years Asha has been a driving force behind not just our increase in the number of students, but the development and improvement of our Academy members.”

President of the Golf Managers Association of Queensland (GMAQ), Aaron Muirhead, praised Geoff as being ‘a leader in the golf industry for quite some time’.

“What particularly impressed the judging panel was the initiatives Geoff put into place at Brisbane Golf Club during the difficult period that Covid presented to our industry,” he said.

“While most of the GMs did some outstanding work in this particular area, Geoff’s initiatives were at the next level. His input and ideas really impressed the panel.”

Geoff plays a hands-on role with membership, and personally handles every new membership enquiry. In the past two years the membership attrition rate has decreased from 12% to 5%, a figure the CEO believes is a result of his close relationship with members.

“This proactive process provides me with the perfect opportunity to start building a long-lasting relationship with the new member, one where if there is a problem in the future, it can be resolved between two connected individuals,” he said.

Another critical area for the CEO is finance, and BGC is now generating sufficient cash surpluses to fund its capital expenditure wish list. The first project to be completed is the full replacement of the irrigation system (at a cost of $1.5 million), which will be completed in November.

Geoff, who joined BGC in 2014, said that while proud of being selected as the award recipient, he was ‘extremely fortunate’ to be able to lead a team of experienced and highly-performing department managers at BGC.

“As a group we have been challenged by COVID-19, like most golf clubs, but have worked hard to continue to improve the member experience as well as dealing with the additional responsibilities COVID has presented,” he said.

“Hopefully the staff and members view these awards as recognition of the outstanding community into which our club has evolved.” – TONY DURKIN