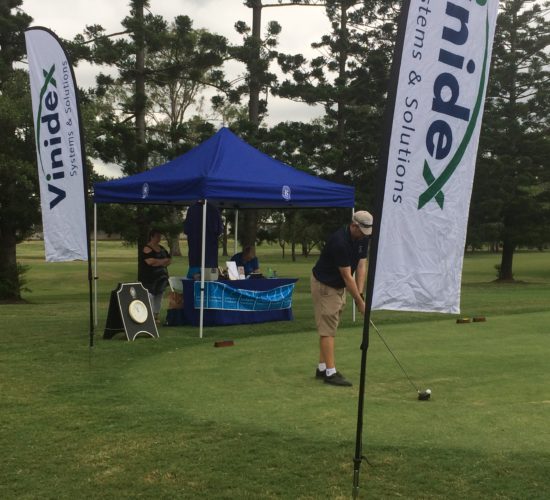 Since a Brisbane-based manufacturing and supply company of advanced pipe systems and solutions started sponsoring The Brisbane Golf Club’s monthly Captain’s Challenge, almost $50,000 has been raised for charity in association with the event.

Vinidex P/L came on board as the event sponsor in 2015 and National Market Manager, Communications and Electrics of the company, Greg McClure, asked for a charity component to be included, and that the Leukaemia Foundation be the beneficiary.

The Brisbane Golf Club committee acceded to the request and members and guests have generously responded through specific fundraising events, donations and support of post-game raffles.

And while the five-year sponsorship term of Vinidex comes to an end in January, Greg is hopeful the Club continues it charity work in conjunction with the Captain’s Challenge.

“We deeply regret we are not continuing with our sponsorship arrangement but, as in most businesses, our company has undergone recent transformation and guidelines have changed,” Greg said.

“But I would be surprised, and disappointed, if the support of another sponsor couldn’t be found. The association we have had with the club, and in particular with theLeukaemia Foundation, has been one of the most fulfilling associations I have enjoyed in my business life.”

Greg, and GM of Coal Seam Gas with Vinidex, Ty Morris, are both BGC members. Greg joined in 1978 and estimates he has played in upwards of 70 percent of the Captain’s Challenge days since the sponsorship kicked in.

The Captain’s Challenge was originally established midway through 2013 and is played on the last Friday of each month, with both morning and afternoon shotgun starts. The golf course is set up as its most difficult, with pins in tougher positions than even Championship events. As a reward, any player who beats their handicap in the Medley Stableford receives one dozen golf balls.

An Order of Merit list is preserved and a winner determined every six months. Points are allocated to the top 68 finishers every month and during each six-month period the golfer tallying the most points wins a $1500 gift voucher.

Previous winners of the Order of Merit have been: 2013, Bruce Chadfield; 2014,
Warwick Oxenford and Nobu Kubota; 2015, Lewis Clelland and Hiroyuki Kano; 2016,
Ed Castrisos and Philip Fraser; 2017, Rick Davenport and Lachlan Maranta; 2018, Stuart Logue and Andrew Seeto; 2018, Michael Roberts (twice); 2019.
While Vinidex may have sponsored the event for the past five years,  Greg said the bouquets for the amount of money raised for charity needs to go to the golf club, and the Leukaemia Foundation volunteers.

“What our company primarily did was provide product for use on the course which, obviously, had a value,” he said.

“But the golf club added the prestige element to the monthly event, and the volunteers from the Leukaemia Foundation carried out the hard work when it came to fundraising. They were absolutely outstanding and deserved every dollar they raised.

“Although we will no longer be involved, our express wish is that another sponsor comes on board to support what is an outstanding golf competition tied in with a wonderful charity.”

The Brisbane Golf Club General Manager, Geoff Kuehner, said the club was sad the association with Vinidex was ending.

“Not only did their sponsorship bring a certain status to this extremely challenging monthly competition, but the involvement with theLeukaemia Foundation added a human component to which all members and guests could relate,” he said.

“But while we are greatly indebted to Greg and Ty for their support, we fully realise what an iconic event has been established in the Captain’s Challenge. As well, there is the element of the involvement of the Leukaemia Foundation and the raising of just on $50,000.

“The event will continue, and we would love to hear from any potential new sponsors.”

Businesses or individuals interested in sponsoring the Captain’s Challenge should contact Geoff Kuehneron 0411 412 666 or via email at geoff@brisbanegolfclub.com.au–TONY DURKIN