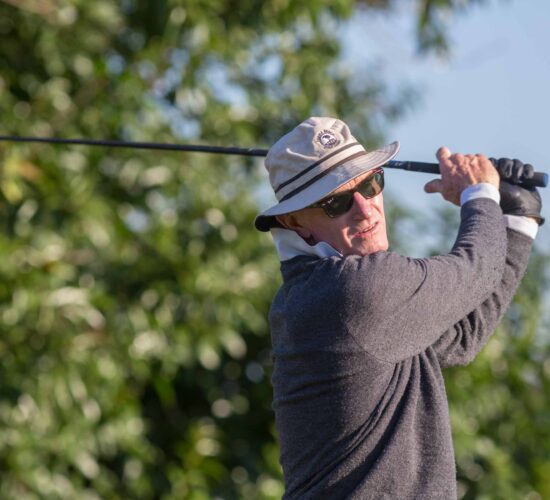 The triumph may not emulate captaining Australia to Rugby’s Grand Slam of UK victories or a rare Bledisloe Cup win, but Andrew Slack is still extremely chuffed by his new title as Veteran’s Handicap Matchplay Champion of The Brisbane Golf Club.

In a see-sawing 18 hole-matchplay final, the 64-year-old beat Greg Braun 6&5 despite being two down after four holes. He then played par golf for the next nine holes, eventually wrapping up the title at the 13th.

Andrew (handicap 11), who retired as Channel Nine’s Sports Editor four years ago, is the second high-profile sporting identity to win a 2020 Championship at the club, finishing on the dais with C Grade Champion and World No.43 ranked ATP Tour player, John Millman. And, like Millman, it was Andrew’s first golf title.

“I have been a member at Brisbane Golf Club for 35 years and this is the first Championship I have won,” said the former Wallaby hero.

“I’m not sure whether that is a reason to feel delighted or embarrassed, but it says a lot about the evolution of my golf game over a long period of time.”

And he declares he has not been alone in suffering that drought.

“There is a group of 10 of us who play regularly at Brisbane, and have done for years,” he explained.

“A few years ago we realised that between us, we had never won an Honour Board event despite the fact we had accumulated 220 years of membership. But then, who’s counting?”

While he enjoys his golf and since retirement regularly plays competition twice a week, Andrew does not take himself too seriously. And despite the Championship win, he describes his recent form as ‘spasmodic at best’.

“Just before the Championships I had a shocker of a round – 105 in fact,” he confessed.

“Then 10 days later, I won the Wednesday A Grade competition. My issue, like a lot of club golfers, is that I find it difficult to string together 18 consistent holes.”

And to illustrate the vagaries of golf, Greg Braun – whom Andrew beat in the final – went out three days later and won the competition with a nett 67.

Andrew says that inconsistency is why matchplay works for him.

“I can have a bad hole in matchplay and it doesn’t really matter,” he said.

After qualifying in the top eight after the first round of the Championships, Andrew was fully tested in both his quarter and semi-final matches. They went to the 19th and 21st holes respectively.

A board member at BGC, the Queensland Rugby icon praised the condition of the course for the Championships, describing it as without doubt the best in his 35 years as a member.

“It looks fantastic, and I hear nothing but praise from the members. The course is an absolute credit to the staff,” he said. – TONY DURKIN